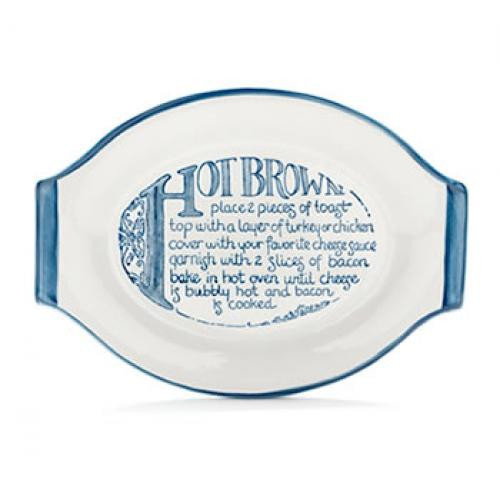 First served at Louisville’s Brown Hotel, the Hot Brown was originally created in 1926 by Chef Fred K. Schmidt as an alternative to ham and egg late night suppers. The open-faced turkey and bacon sandwich with Mornay sauce is now a Louisville tradition with worldwide appeal. Featured in restaurants throughout Kentucky and as far north as New York City, the Hot Brown has been featured in Southern Living Magazine, The Los Angeles Times, NBC’s Today Show and The Wall Street Journal. While the original recipe is still served at the Brown Hotel, you’ll find it’s a great post-Thanksgiving use of leftover turkey.

Stoneware artists have hand painted the recipe on a 12" baking dish with handles. The dish is just deep enough to pile on all of the ingredients and bake to a gooey golden brown.

Feeding the masses? Make mini Hot Browns and transfer them to a heated Hot Brown Baking Dish to keep them warm.

20" Antipasto Tray with Bowl - Off To The Races