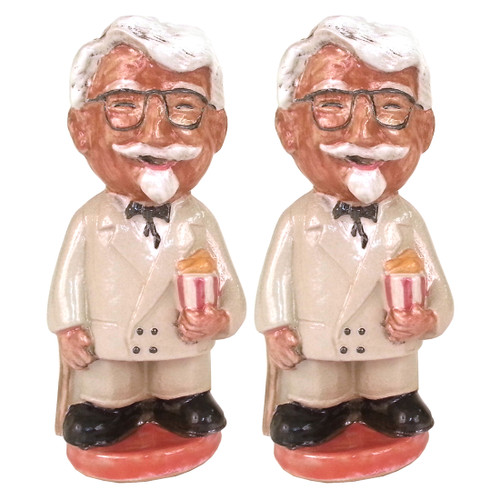 This three-dimensional salt and pepper shaker set pays tribute to the Colonel – with a bucket of chicken in his hand and his recognizable suit.

An American businessman best known for founding Kentucky Fried Chicken (KFC) he began selling fried chicken from his roadside restaurant in Corbin, Kentucky, during the Great Depression. KFC is now headquartered in Louisville.

After being recommissioned as a Kentucky Colonel in 1950, Sanders began to dress the part, growing a goatee, wearing a white suit and a black string tie, and referring to himself as “Colonel.”

On your next visit to Louisville pose with a life-sized replica of the Colonel at the Louisville Visitors Center. Or visit Cave Hill Cemetery, just 1 mile from the Stoneware Art Factory, where he’s buried in that characteristic suit and tie. Rumor has it, every so often you’ll spot a fan leaving a bucket of chicken graveside.

Dimensions: 2” x 6” Due to the unique nature of our products, dimensions listed may not be exact.

1qt Off To The Races Bar Pitcher