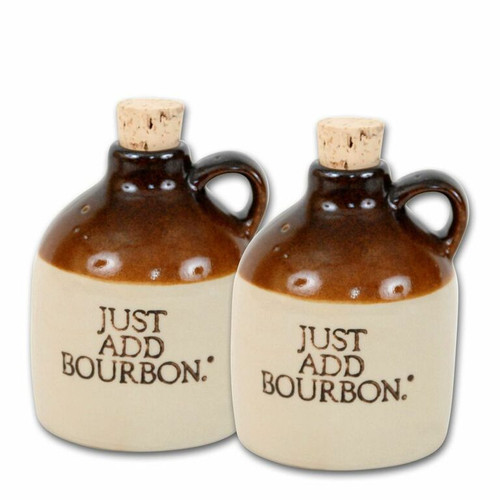 The first steamboat arrived in Louisville in 1811, signaling a new age of growth for Louisville and the distilling industry. The steamboat allowed for the expanded distribution, in larger quantities, of Kentucky Bourbon to new markets. By the 1820s, commercial distilleries in the state’s rural areas were on the rise, as was Louisville’s stoneware industry, which produced the jugs used to package the area’s precious bourbon.

These mini Just Add Bourbon Jug Salt & Pepper Shakers are a nod to the Stoneware industry’s early role in the sale and distribution of America’s only native spirit. Functional, these jugs can be filled using a funnel and sealed with a cork (provided). The shape and colors are reminiscent of historical jugs seen in the Louisville Stoneware Art Factory’s Museum in Louisville, Kentucky.

1qt Off To The Races Bar Pitcher