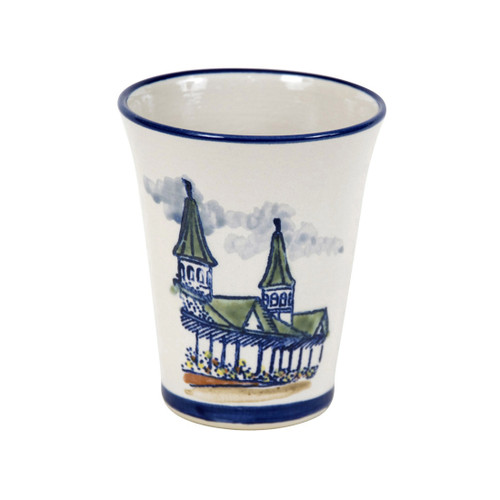 Located in the heart of Bourbon Country, and with a history of making whiskey jugs, it’s only natural for Louisville Stoneware to have a line of Julep Cups.

The exact origins of the Mint Julep are unknown, but it is said to have originated in the southern United States during the eighteenth century. U.S. Senator Henry Clay of Kentucky introduced the drink to Washington, D.C., at the Round Robin Bar in the famous Willard Hotel. It was also the favorite drink of American author William Faulkner. The Mint Julep is best known as the official drink of the Kentucky Derby, a position it has held since 1938, with Churchill Downs making over 120,000 for Derby fans each year.

The Twin Spires of Churchill Downs have become a recognized landmark and a visual symbol of its most famous race, the Kentucky Derby. Constructed in 1895, the Twin Spires were the creation of a 24-year-old draftsman, Joseph Dominic Baldez. The hexagonal spires exemplify late 19th century architecture, in which symmetry and balance took precedence over function.

On this Stoneware Julep Cup, their majestic beauty is captured in hand-painted pastels, accented by the warm tones of the track and the soft gray-blue clouds floating past – on a perfect Derby Day.

Chill your Stoneware Julep Cup in the freezer for at least 30 minutes – it can be stored there permanently if you like. With a slightly flared rim, this cup is perfect for slow sipping – the only way a julep should be enjoyed. For an authentic Julep-sipping experience, we suggest following the recipe on our Julep pitcher. Cheers!

1 Qt Off To The Races Bar Pitcher