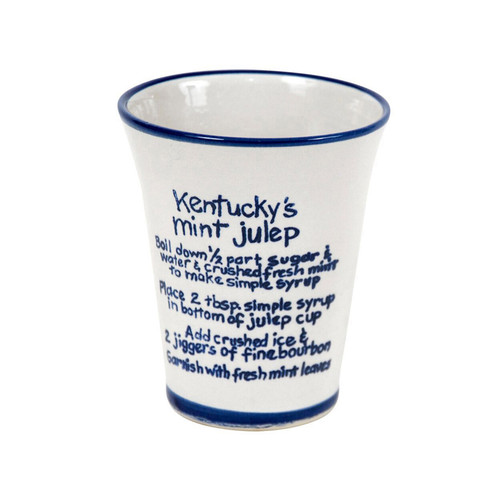 Never worry about finding the recipe…it’s painted right on the side! Located in the heart of Bourbon Country, and with a history of making whiskey jugs, it’s only natural for Stoneware to have a line of Julep Cups. The exact origins of the Mint Julep are unknown, but it is said to have originated in the southern United States during the eighteenth century. U.S. Senator Henry Clay of Kentucky introduced the drink to Washington, D.C., at the Round Robin Bar in the famous Willard Hotel. The Mint Julep is best known as the official drink of the Kentucky Derby, a position it has held since 1938, with Churchill Downs making over 120,000 for Derby fans each year.

Stoneware’s most popular selling Julep Cup was redesigned in 2014. A modern mint sprig is hand painted in brown and green glazes on one side with the recipe on the other. A green band of glaze at the top and bottom of the cup complete the look.

Chill your Stoneware Julep Cup in the freezer for at least 30 minutes – it can be stored there permanently if you like. With a slightly flared rim, this cup is perfect for slow sipping – the only way a julep should be enjoyed.

Consider using the Julep Cup as a vase for fresh cut flowers or as a pencil holder that makes a statement.

20" Antipasto Tray with Bowl - Off To The Races